One week ago today we took Maxwell to the vet because he had a bad tooth. The vet looked at his teeth and said she was sure there were two bad teeth that would need to come out. Poor Max.

Three and a half hours later we got a call from the vet. She had to pull 20 teeth. Twenty!

Silence on my part. (I was having a hard time comprehending 20 teeth being pulled all at once. Ouch! It wasn’t computing.)

Vet: “He’ll be fine. A lot of cats have to have all their teeth pulled and they do just fine.”

Well, she’s been right so far. Max has done just fine. He’s had a couple of bad days – the day his pain medication was finished for one. He didn’t yowl very much, just enough to make us feel really sorry for him and spoil him a little bit. Ok, a lot. He’s loving all the attention.

He’s also enjoying the canned food that he loves and doesn’t get very often. The other cats were jealous so we had to get some canned food for them, too. Ours is a happy household right now.

How did Max end up with 20 bad teeth? Actually, what happened was the bone was crumbling and his teeth were loose, causing him pain. It would only get worse in the future so the teeth had to come out. He did indeed have only two bad teeth. Now we have to hope that his last four don’t go bad. 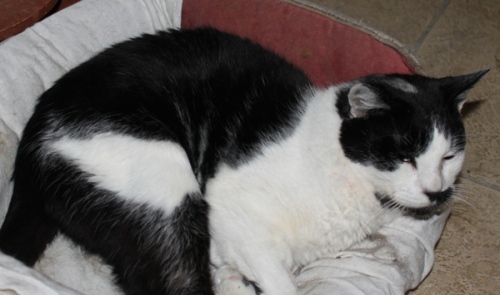 See? Max is fine. Drugged up and still drooling, but fine. This photo was taken shortly after he came home. Today he’s almost his normal self, which actually looks a lot like he looks here, minus the drool.