December 10 was a warm & sunny day when we headed down to Inglewood Park Cemetery to visit the graves of my brother, cousins, aunts, uncles and friends. This year wa

s a bit different from past years, though, because we had an additional mission. Before we left the house I logged onto Find A Grave to see if anyone had a photo request posted. Several were there, including one from October, which is unusual since requests at this cemetery are usually claimed within a few days. Not so with this one. We soon found out why.

Christopher Crisp was one of three people we were going to hunt for. The first two were easy to find. Little did we know it would take an hour and a half of cemetery tromping to find the third one. Mr. Crisp was born in England, so we started using our best English accents (Mike’s is good, mine not so much) when speaking to each other (hey, Mike started it!), which made the search more fun.

After scouring the La Ramada section for an hour I decided it was time to visit the office and ask for help. We were starving and parched, but weren’t willing to give up yet. The young lady in the office offered to send a customer rep out to help us find the grave. Louis joined us a short while later and ended up going way beyond any expectations to help us find the grave. Perhaps he was caught up in finding the missing headstone, too.

After spending about 10-15 minutes checking markers for a grave number close to Mr. Crisp’s without success, Louis headed to the front office to pick up a list of graves in the same row as Mr. Crisp’s. One of the graves on the list was quickly found, which gave Louis a place to start.

Louis started poking his shovel in the grass where the headstone should have been. Clunk! Hmmm, could that be it??? He jabbed the ground a few inches over and… clunk!… another hit. Yep, it was indeed a headstone. The excitement mounted as he lifted the blanket of sod and there was… Mr. O’Hara. Ok, then, it MUST be the next one over. Again, Louis gave the ground a jab and – clunk! – a possible headstone. A few inches over and… another clunk! Could THIS be Mr. Crisp?

Once again, Louis lifted a blanket of sod, but before he had it completely lifted I could see CHRISTOPHER and 1847 imbedded in the sod. We had found Mr. Crisp! 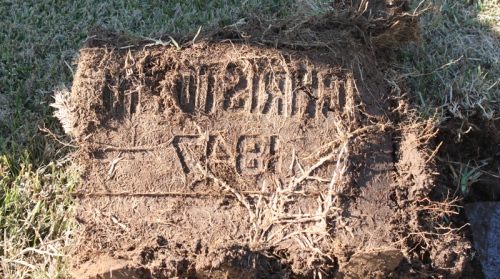 CHRISTOPHER 1847 in the sod

CRISP embedded in the sod

A little cleanup reveals a headstone in perfect condition. There isn’t a chip, crack or scratch to be found. Even Louis was impressed. 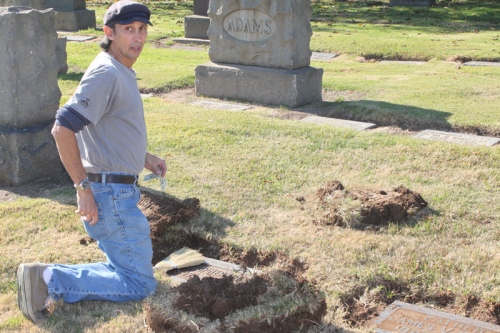 …and Louis steps in to help. He’s got the BIG broom and a gallon of water. 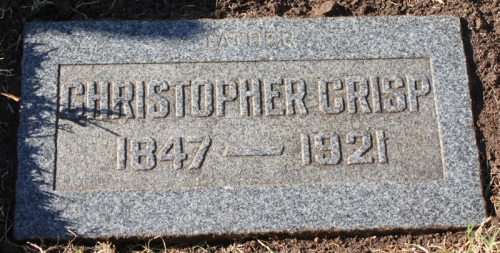 We’ve decided to adopt Mr. Crisp as our honorary great-grandfather and will be trimming, cleaning and decorating his grave each Christmas along with our family members’ graves at Inglewood Park; his grave will never become overgrown again as long as we’re around. Graving has provided adventures for us before, but this is one that will stand out in our memories. We’ll never forget the fun we had searching for – and the thrill of finding – a long-forgotten headstone.

We’ve been reading all the Crisp Point Light Historical Society info and now plan to go see it in person one day. It’s amazing how beautifully the lighthouse has been restored. I just wish there was more info – and a photo! – of Mr. Crisp somewhere.

~ UPDATE! ~
Here are a couple of photos of Mr. Crisp’s grave for 2013. We brought along a little lighthouse and a light that we thought looked like it was part of a lighthouse (use your imagination). We never got to see the light at night, but hopefully Mr. Crisp enjoyed it. 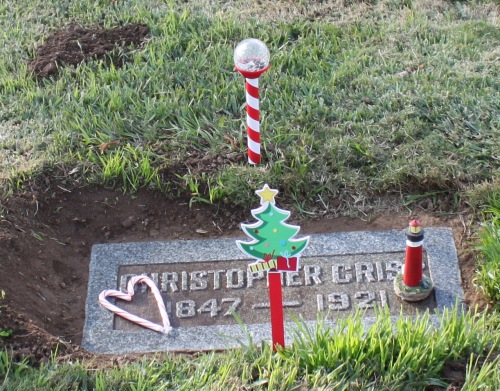 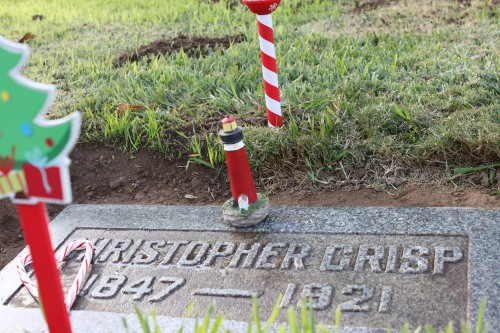 Cypress Lawn Cemetery is a spectacular cemetery located in Colma, California. Many industrial titans who lived in San Francisco are buried here, along with publishing giants and people who made this area (and the country in some cases) what it is today.

The entrance looks like the entrance to a medieval castle. The back gate continues the medieval theme: 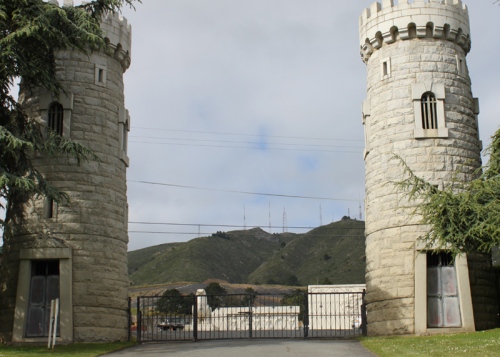 In between these structures is a cemetery filled with monuments, crypts, mausoleums and graves that are so spectacular that very few people could afford them nowadays.

There are very old tombstones, some from as early as the 1800s… 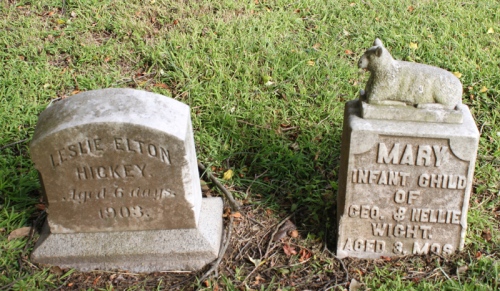 Man’s best friend can be found in this cemetery, apparently waiting for his master. 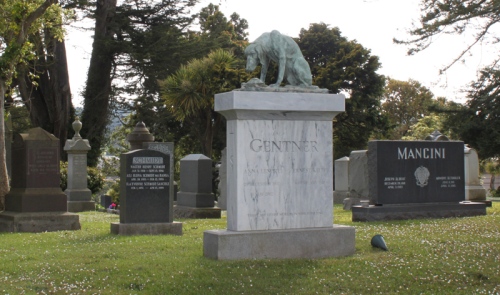 Photographers use the beautiful, gothic atmosphere for photo shoots.

My favorite crypts are the ones buried in a small hill. The monument is on the top, the crypt is in the hillside. 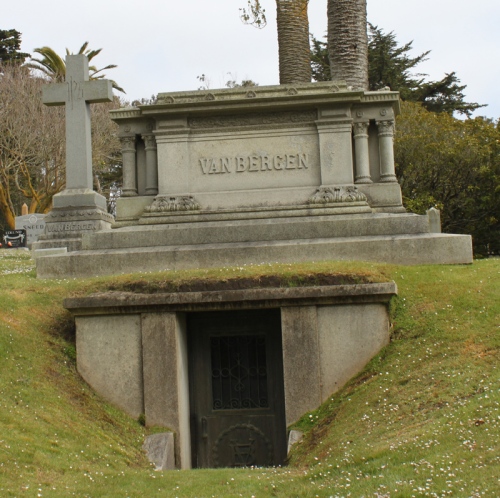 Colma, known as “the city of the silent,” has 1.5 million residents underground in 17 cemeteries and about 1700 above ground… all in less than two square miles. Colma’s motto: “It’s great to be alive in Colma.”